I was a freshman in high school when I first considered the possibility of a school shooting.

Someone had made an off-handed remark about shooting his classmates. Regardless of his intention–a failed attempt at dark humor, or maybe deeply-rooted cynicism– it was received as it should have been: seriously, and as a threat to our safety. That week, rumors spread throughout the school like wildfire: it would happen on Friday. He had a list. A few people were on his ‘safe list.’ We analyzed his personality and behavior. We asked ourselves if we were surprised.

Our principal composed a letter that we, in turn, gave to our parents. It stated the nature of the threat, the rumors, and how the faculty members were responding. I don’t remember the specifics, but I remember what it boiled down to: we would be safe.

Even so, many of us debated if we would come to school that Friday. That Thursday night, I pored over my Bible and texted my friends about how scared I was. I didn’t know what to do.

I’m not sure how or why I decided to attend school the next day, but I did. I wrote a Bible verse on my hand, because it gave me courage. My friend Lindsey wore a Superman shirt, simultaneously a cheeky response to the rumors and a middle finger to danger. Many of my classmates did not come to school. I didn’t blame them. There was fear and tension in the air that did not disappear until the last bell rang.

And thankfully, we were safe.

I was twenty-three when I was told one of my cousins had been injured in a shooting. It was the sort of moment where everything stops. Nothing felt real–because we spend years watching the news and hearing these stories over and over again and it’s a distant problem, one defined by distant sadness and stilted sympathy, and then it happens to someone you love.

I stayed home from work. At the time, I was living with my friends Rose and Christina, as well as my older cousin, Chris. Our cousin Alyssa lived nearby. She came over. None of us wanted to be alone. We ordered pizza, because pizza fixes everything. Or at least, it used to.

So many, in fact, that I know this does not even begin to cover it. I cannot name or remember them all, and that horrifies me. Is this what we consider normal? Massacres that we cannot recall? Yet another news story that states that a shooting was the deadliest in our nation’s history?

To put it simply: I’m tired.

You may not agree with me about gun reform. I can accept that. I’ll accept that begrudgingly, but that’s a rant for another day–and quite frankly, you can Google all the data that has led me to my current convictions. At the end of the day, violence is a multi-faceted problem and it requires a multi-faceted solution.

I only have ideas about what gun reform should entail, but I do know that thoughts and prayers are not enough. I don’t think they are meaningless–I pray every single day because I a) I am a Christian, and prayer is an integral part of my faith, and b) I believe it changes my heart, which in turn changes the world around me.

But faith without works is dead. And until we actively respond to this violence, we are worshiping an abstract, absent god instead of the God we claim to serve: the God of divine Love who is made manifest in Her people.

And then he did something.

What are we going to do? 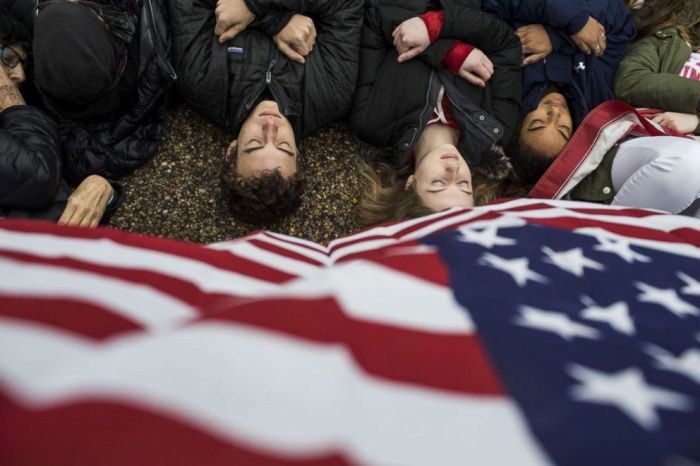 First and foremost, we need to speak out.

Everytown has started a campaign called Throw Them Out, encouraging constituents to tell Congress that they support common sense gun laws. Remember: our government represents us–not the NRA. My personal hero Glennon Doyle explains more in this video:

Consider attending a protest in your area. The Women’s March is organizing a walkout on March 14; another is scheduled for April 20, the nineteenth anniversary of the Columbine shooting. On March 24, there’s March For Our Lives, a protest in Washington DC (and other cities across the US) to demand gun reform legislation.

We also need to respond with an outpouring of love. Support the people who have been affected by this most recent shooting; they have a long road ahead of them. Write a letter to students. Donate to the victims and their families. Give your loved ones an extra hug.

It will not be easy.
But we can do this.
Let’s make history.